A new edge diagnostic for the measurement of the magnetic field line angle has been installed on the ASDEX Upgrade tokamak. The new system relies onthe motional Stark effect and is based on the simultaneous measurement ofthe polarization direction of the linearly polarized π (parallel to the electricfield) and σ (perpendicular to the electric field) lines of the Balmer spectralline Dα. In this setup, we use 3 independent observations of the same spot with polarizer angles α ≈ 0°, 45° and 90° (see figure), where 0° serves as a reference for the π lines, 90° for the σ lines, and 45° measures a combination of both σ and π lines. In order to extract the magnetic field line angle a forward model for the Stark split Dα spectra has been developed. 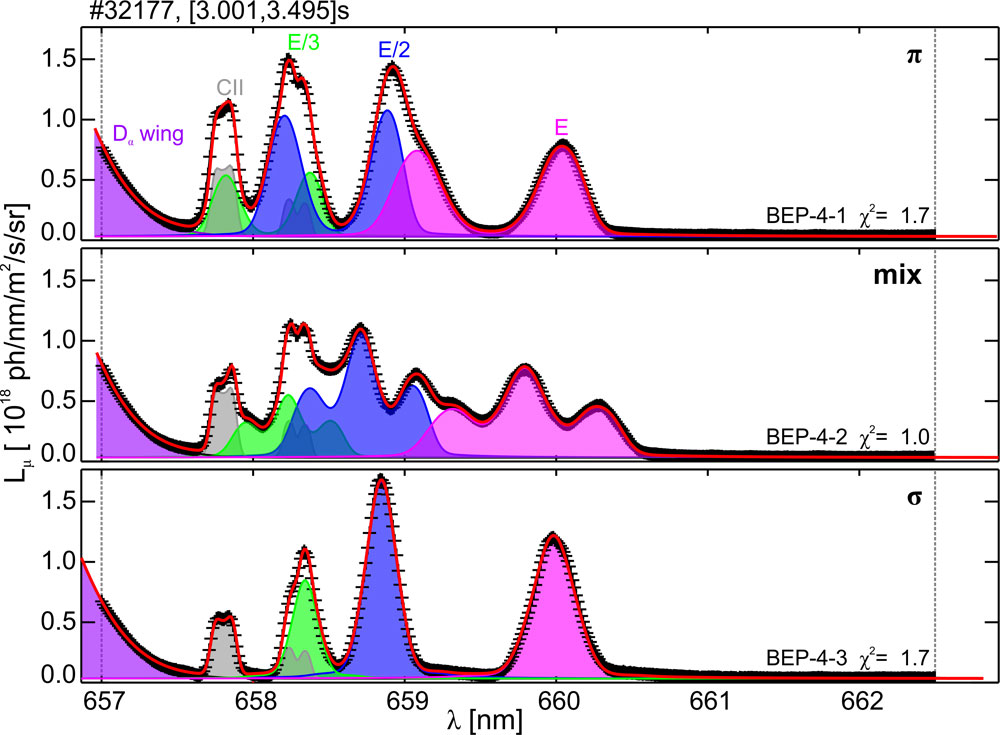 The interplay between plasma flows and transport is a key ingredient of the physics that governs the edge transport barrier (ETB) of an H-mode fusion plasma. Impurity transport is of particular importance as it is crucial for understanding and controlling the impurity content in the plasma. In the ETB, the impurity particle transporth as been observed to be determined by neoclassical theory and the question arises whether the particle transportlevel is affected if poloidal impurity asymmetries are present in the plasma edge. Using the high-resolution edge charge exchange diagnostic suite at ASDEX Upgrade we could study asymmetries on the flux surfaces at the plasma edge.

The measurements reveal that in the ETB the flow structure is asymmetric on the flux surfaces. The asymmetry in the flow pattern can be explained by an excess of impurity density at the HFS following the condition of divergence-free flows on a flux surface, which is based on the general continuity equation. Comparison of the measured flows to theoretical predictions based on the parallel momentum balance reveals the nature of theparallel impurity dynamics. The key features of the experimental data including the shape of the rotation profilesand the poloidal impurity density asymmetry are reproduced quantitatively for the first time. 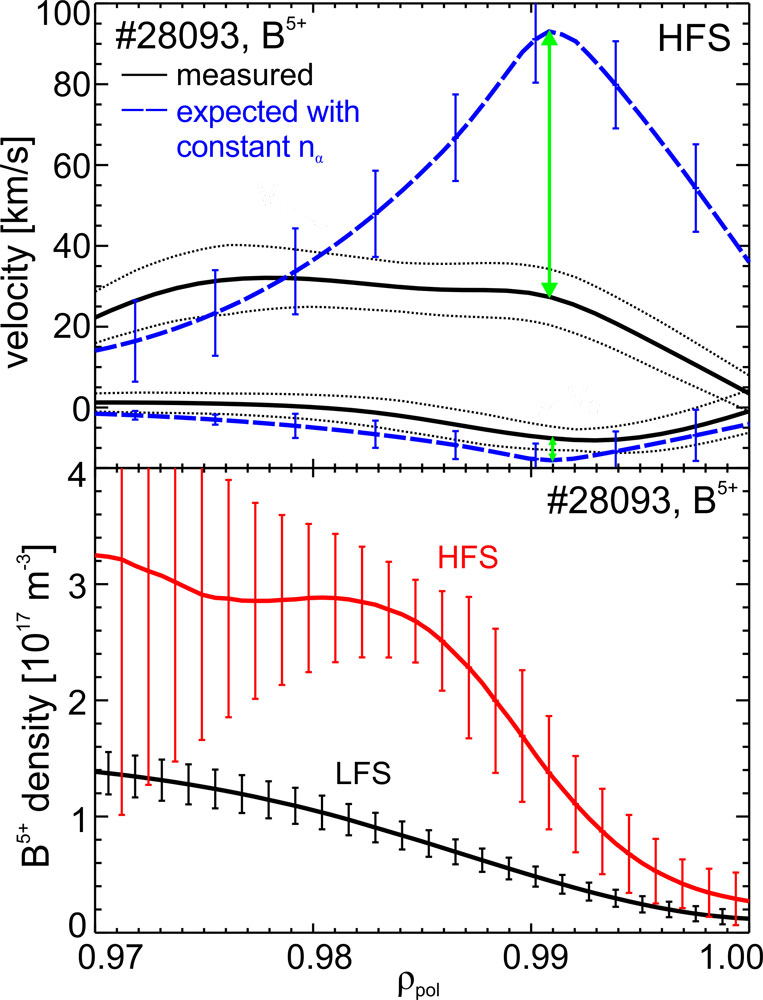 The understanding of the physics relevant to the edge transport barrier (ETB) of an H-mode fusion plasma is of crucial importance as it leads to steep gradients at the plasma edge which implies a confinement gain at the boundary of the plasma. This improvement propagates into the plasma core, where a hot and dense plasma is required for fusion. The ETB is thought to be caused by a sheared plasma flow perpendicular to the magnetic field which is equivalent to a sheared radial electric field Er. We have confirmed this mechanism as the location of the steepest ion pressure gradient ∇pi was shown with unprecedented accuracy to match the position of the largest Er shear. These measurements were performed using the high-resolution edge CXRS diagnostic suite available at ASDEX Upgrade. 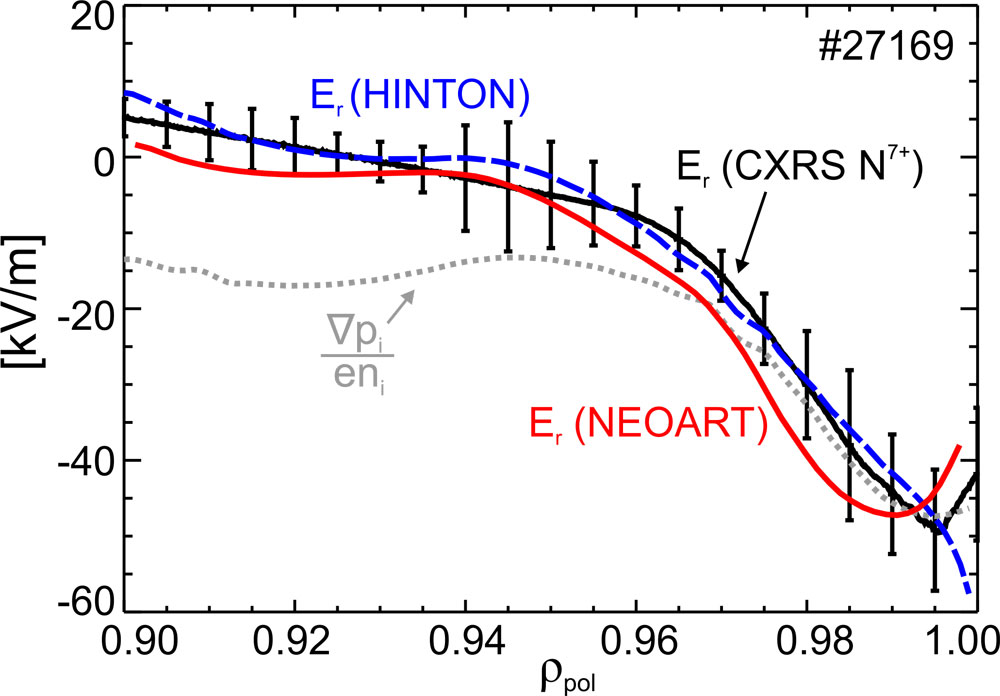 We have found that, in the radial force balance of impurities the poloidal rotation contribution yields the dominant term in the evaluation of Er at the plasma edge. For the main ions, the Er minimum coincides with the maximum pressure gradient term ∇pi/eni supporting that the Er well is created by the main ion species. The fact that ∇pi/eni matches Er in the ETB is consistent with the main ion poloidal flow being at neoclassical levels. Quantitative comparisons between neoclassical predictions and experimental measurements of both impurity and main ion poloidal rotation show that the sign and themagnitude are in remarkably good agreement.

Ions executing orbits that cross the separatrix have a certain probability of getting lost. These losses, which are non-ambipolar and a potential source for the radial electric field at the plasma edge, are commonly referred to as ion orbit losses (IOL). The understanding of sources and drivers of radial electric fields (Er) is very important, as the formation of a steep gradient in Er at the plasma edge is connected with a transition to high confinement.


Ion orbit loss is a very active research topic [1-4], as it has been pointed out as a potential driver for the L-H transition. While previous studies have shown that in the fully developed H-mode [5] and during the L-H transition [6] the radial electric field is well described by neoclassical theory, under certain conditions deviations from the neoclassical prediction have been observed.


The studies carried out in the PSFT group aim to shed light on the effect of ion orbit losses on the Er profile in cases with non-neoclassical poloidal rotation, such as shortly after the ELM cycle, reversed Bt/Ip, or in plasmas with externally applied magnetic perturbations which show an increased level of fast-ion losses [7].


Measurements of the main ion species


In future fusion devices, the bulk plasma properties, such as temperature and density, are important since they determine plasma performance, confinement and achievable fusion power.


The edge radial electric field (Er) shear is one of the key ingredients for achieving high plasma performance. Dedicated experiments in helium plasmas have shown that the main ion pressure gradient (∇pi/eni) is the main driver for Er, as it constitutes the dominant term in the main ion radial force balance [1]. This result is consistent with poloidal main ion flows being at the neoclassical level, while impurity flows adjust as all species feel the same Er established by the main ions. 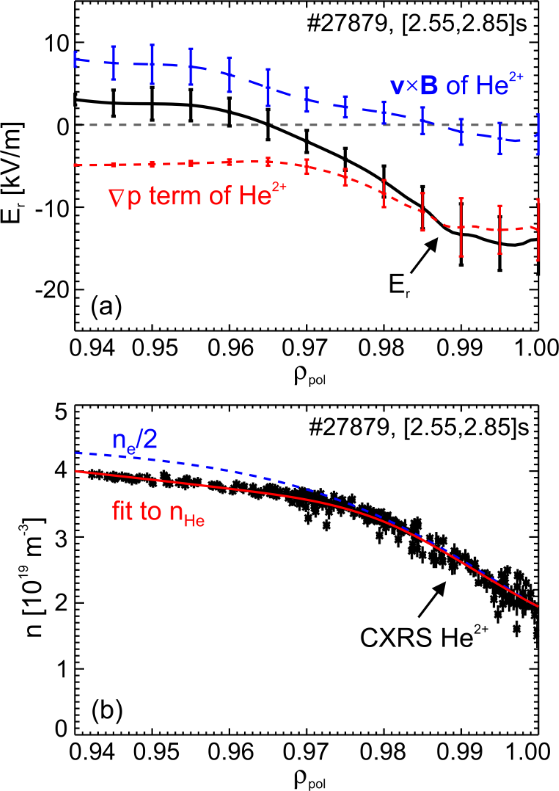 Fig. 4. Radial electric field shows good agreement with the main ion pressure gradient term, while the v×B velocity is rather small. Dedicated experiments in helium plasmas were carried out in the ASDEX Upgrade tokamak. Figure taken from [1].

A plasma is a quasineutral ionised gas that exhibits collective effects. In the presence of externally applied magnetic perturbations, the plasma develops internal currents that, depending on the properties of the plasma equilibrium and applied perturbation, can shield or even amplify the applied external perturbation. Symmetry breaking 3D resonant magnetic perturbations are applied, nowadays to control internal MHD perturbations in most of the large magnetically confined fusion devices and are one of the most promising techniques to control Edge Localised Modes (ELMs) in ITER. The validation of plasma response models is therefore of crucial importance to be able to make predictions towards ITER. Fast ions being particularly sensitive to symmetry-breaking 3D fields, accurate fast ion measurements may help us to probe the plasma response and thus test plasma response models and numerical tools. Recent measurements in AUG have revealed the importance of the plasma collisionality and RMP poloidal spectra on the observed fast-ion losses induced by the externally applied n=2 RMP, see Fig. 4. Preliminary simulations have shown that most of the losses are induced by the applied field perturbation rather than by modifications of the NBI birth profile. However, neither the absolute ion fluxes to the wall nor the velocity-space of the escaping ions could be reproduced in simulations. 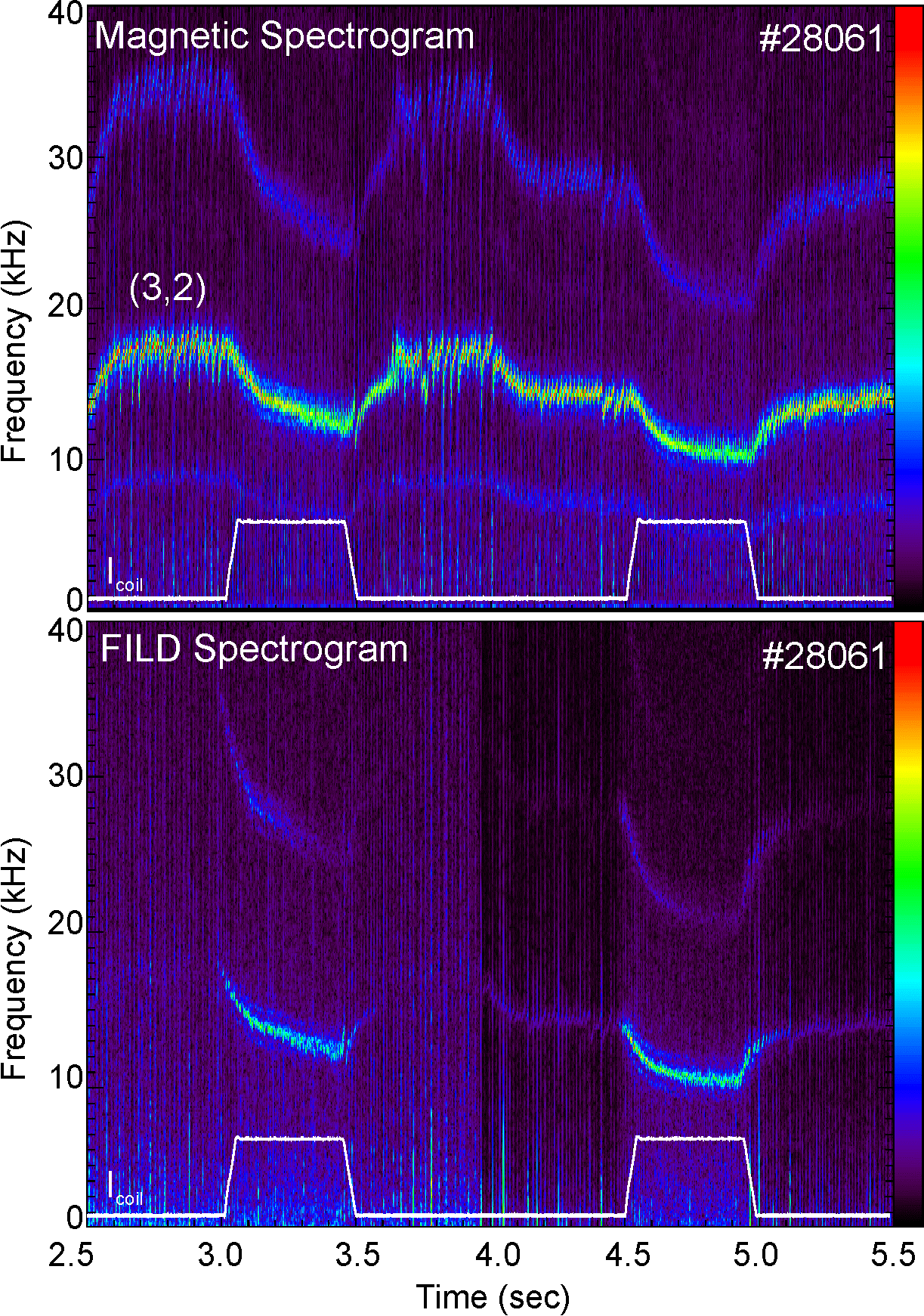 Fig. 5. AUG. Spectrogram of magnetics perturbation (a) and associated fast-ion losses (b).

Recent AUG orbit simulations and experiments indicate that an Edge Resonant Transport Layer (ERTL) might be responsible for the observed fast-ion losses in the presence of externally applied 3D fields and that this ERTL might play an important role on the overall density pump-out and ELM suppression mechanism.

At Seville, we model plasma response employing 3D fluid/drift-kinetic simulations performed using the MEGA[1-2] code. This model employs a non-linear dynamic approach, where changes to the plasma equilibrium accounted for through a full MHD treatment of the background plasma, while super-thermal particles are considered on fast Alvenic timescales by a drift-kinetic model.